So the doctor shows me into the exam room, before I’ve even turned to sit down in the chair she announces, “Well I’ve got your MRI results… it’s nothing surgical.” 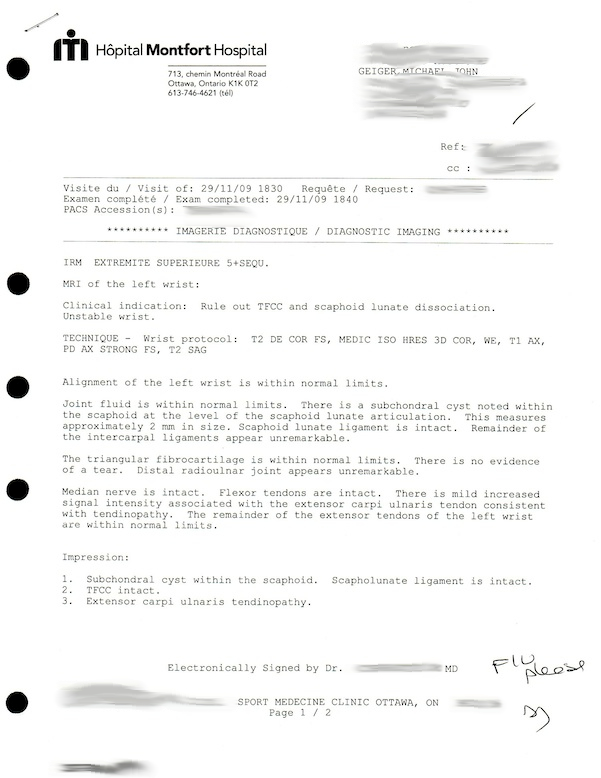 So welcome to my hypermobile life: My ligaments stretch, never contract, and heal on a scale that’s 10X longer than the average human. (And in an average person it’s very slow going anyway.) It’s the same root-cause to the problem I have with my knees and ankles. And hip. And shoulder. And TMJ. And now my wrist. And bad enough that life sucks, but not bad enough that they’ll (be able to) do anything. Surgeons won’t operate a) because nothing’s actually “wrong” and b) my ligaments are so loose that anything they do would be rendered moot after a semi-negligible amount of time anyway.

What’s got me angry/frustrated/annoyed/sad is that when I finally thought real progress was about to happen, my doctor takes the position that there’s some tendinitis and with some PT/OT, everything will be fine. 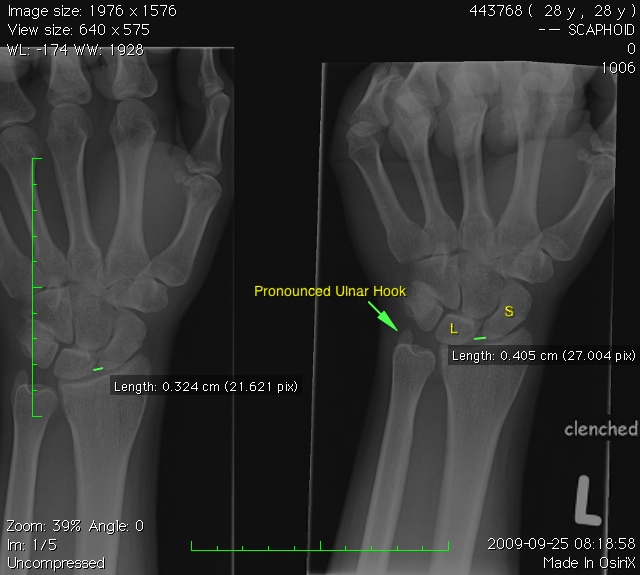 Yeah – that shows the scapholunate ligament ain’t doin’ it’s job. The ECU tendinitis that the MRI shows has nothing to do with that. (ECU runs from the base of your pinky almost up to your armpit.) While it partially explains the constant pain, the apparent TFCC pain, and some of the gripping problems and flexion/dorsiflexion (scooping motion), it doesn’t come close to being the reason for the clunking, the hypermobile lunate, the wicked spasms that inhibited my PT from doing anything. It also means that if I start working my wrist, there’s a really good risk of developing some awesome arthritis due to the very poor structure within. I think my doctor completely missed this. Or forgot that the X-Rays show this.

Admittedly it took me a few hours afterwards to realize there’s a logic problem here too, but I think this is a very big issue that is unaddressed. Her advice was to taper using the splint/cast-thing “since we’re not protecting anything anymore, you might as well get things moving.” I think this would be premature, since my wrist still feels extremely unstable. She agreed and said that we should defer to the hand-OT to start that progression.

Oh – And from a casual Googling – sometimes a cyst in the scaphoid is an indicator of a latent fracture, or cartilage damage. She didn’t mention this at all. Maybe it’s moot, maybe it’s relevant. Maybe it’s the elephant in the room.

… I’m going to get a second opinion.

Tomorrow I call my other sports-doc, (the one that’s been seeing me since I was 9, who’s looking at my knees again) to look at this, she’s the one that I’d been referred to originally. (Reason it took so long to get an appointment? The referring physician never indicated any priority on the referral, so I was at the very bottom of the pile.)

I’ll also order a copy of my MRI films.

I’d really like to talk to an orthopedic surgeon too… see what other options there are. (Pin the ligaments?) (Prolotherapy?) (Temporary/External Fusion?) (Rubber bands?)

This isn’t the end of this story. Not a chance.